This is one of South Africa’s best transfrontier parks and the most visited in the country. The park is famous for the big 5 and offers a wide variety of accommodation establishments.

Kruger National Park is also rich in vegetation such as tall Acacias trees, Marula trees and small gardens with aloes and Barberton daisies to name a few.

There are about 10 entrances in the Kruger National Park and are mentioned below: 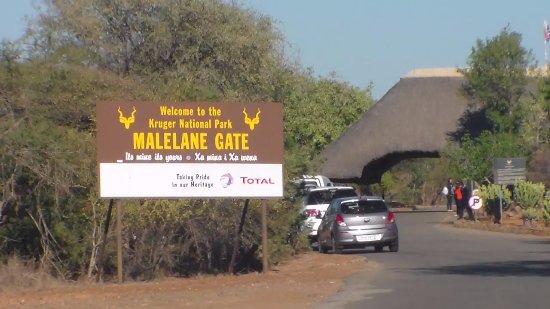 The Malelane Gate is the main original reserve in the park, where the first warden was placed in 1902 for him to create a home for the wildlife to keep them safe where none can get them.

The warden’s name was Colonel James Stevenson- Hamilton. The Malelane camp consists of a variety of rest camps and some good viewing spots. It has great caravan and camping sites also offers a wide range of activities and attractions.

In this area, you are most likely to see Kudus, Giraffes, and Duikers. If you are lucky, you might spot the Big 5. This is one of the smallest campsites in the park and offers accommodation to a maximum of 19 people.

There are no day visitors allowed therefore people have a lot of privacy. 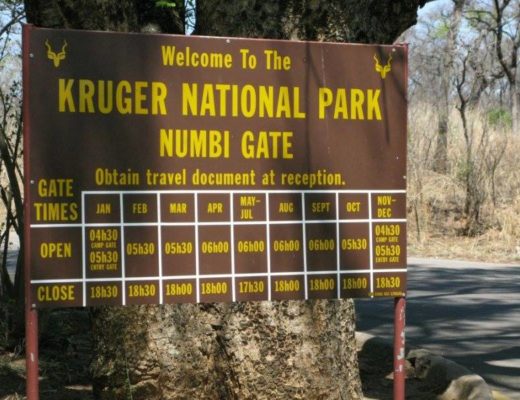 The very first visitors to the Kruger National Park went in through the Numbi Gate a year after the park was open to the public in 1926.

The real meaning of this entrance gate is taken from a SiSwati word for a small fruit of the Transvaal milk plum which was used by the Voortrekkers to make a type of a brandy that is known as mampoer.

The ground at this site is good for a few browsers; hence the first animal you’ll most probably spot is a Kudu.

The other animals that you are most likely to spot are Black Rhinos, Sable antelope, Lichtenstein’s hartebeest, and Leopards. 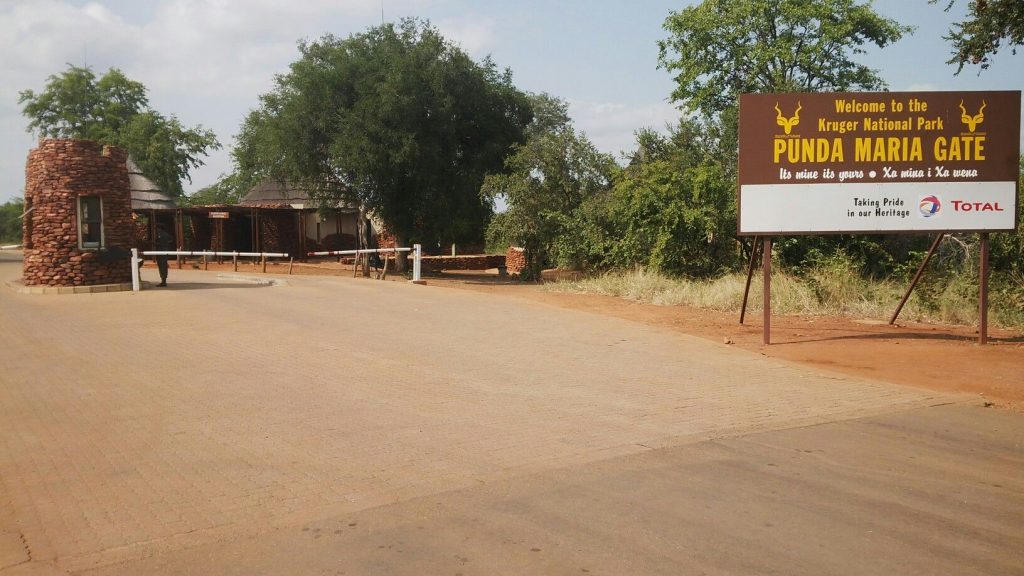 Punda Maria Gate is the direct access point to Northern Kruger from Gauteng, which means it has the most tourists from the province.

The camp was named by the first ranger of the area who was Kat”Coetser and named it after his wife whose name was Maria.

The name Punda is taken from a Swahili word “Punda Miliya” which means Zebra.

The animals that can be found in this camp are Sharpe’s grysbok, Wild dogs, Zebra, Kudu, and Elephants. 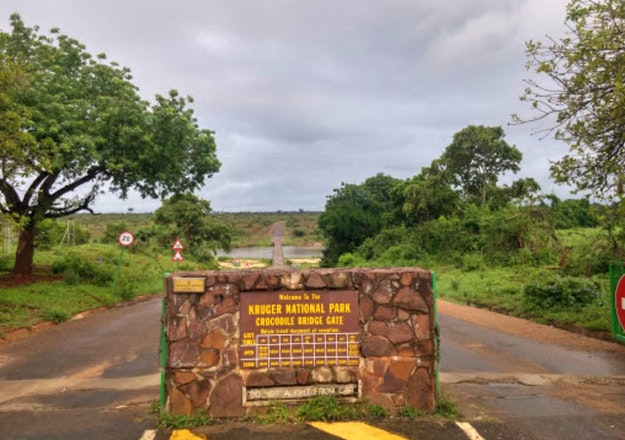 This is the most eastern entrance of Kruger National Park. The gate can be entered in from theN4 road, the N4 runs along Nelspruit and Malelane.

The camp is named after the Crocodile River.

It is also close to the border gate between South Africa and Mozambique. It has the most thrilling wildlife viewing opportunities.

The best part about the Crocodile Bridge camp is the Rhino Territory, you get to see white Rhinos and Black Rhinos. 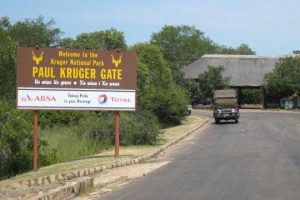 This gate is the closest entrance and the quickest way to get in and out Skukuza. The gate is close to Sabie River which is known for Hippos and Crocodiles.

The park was named after the late Transvaal President Paul Kruger who was a big fan of the Bush; hence they also have a sculpture of the man.

The Paul Kruger Bridge is the best known for its amazing Birding spots. 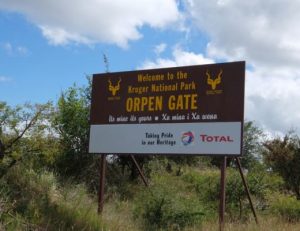 The Orpen entrance is situated in the middle of the western border of Kruger National Park. It is the entrance gate to the central region and is the small major camp.

There is a lot of African wildlife that you can spot at this camp including Leopards, cheetahs, and lions.

Outside the camp, there is a small waterhole where you can spot animals such as impalas and baboons in the area and in the evening’s Elephants drinking water there. 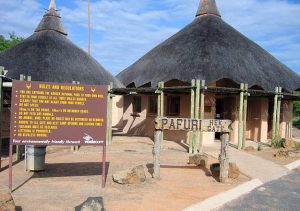 This entrance is located on the Northern side of Kruger National Park.

The camp is a luxury safari lodge that is on the best birding area in Kruger National Park.

The camp is situated in the meeting point of South Africa, Mozambique and Zimbabwe.

It offers amazing wildlife sightings including the best birding experiences. 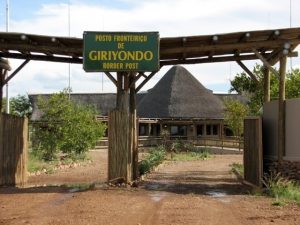 This gate is located in Mozambique and is one of the two gateways into the Kruger National Park and Limpopo National Park in the country.

The park in Mozambique is called Parque Nacional do Limpopo which is in Portuguese, a language that is spoken in the country.

The major rest camps are Letaba and Mopani; they are the only ones that offer all the services.

Letaba is the most beautiful camp in the park; it has the most amazing views, birdlife, and bushbuck that are in the camp.

There are so many picnic spots in the Giriyondo region and also rest stops all the way through the park. 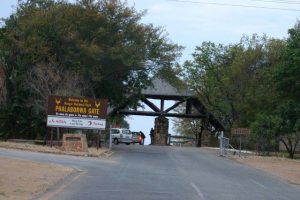 The Phalaborwa entrance is situated on the Northern side of Kruger and is totally different from the eastern side. There are not a lot of animals in this area because of the dry vegetation.

This area is also full of the Mopane trees, bush willows, and the acacias trees which is the best thing to also see in this side of Kruger.

This region also has a lot of Elephants and wild dogs. You will also get to see the Sable waterhole or the Masorini Cultural Village at the Vudogwa Mountain. 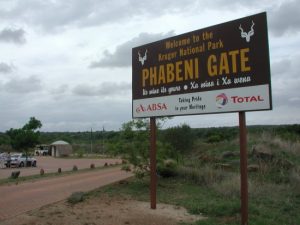 The Phabeni was built in 2002 to help people coming from Johannesburg or Pretoria via Hazyview to not struggle to get in the park.

It is culturally decorated and there are three thatched rondavels when entering the gate that symbolizes the cultures of the country South Africa.

There are spectacular views of the Big 5 and other animals in this region such as Impalas, Kudus, Giraffes, and Hippos, etc.

The area is also full of some incredible birdlife to watch.

The park offers the best experiences all year round depending on what exactly you would want to experience. Every season has its own best feature. Most visitors tend to choose to visit the park in the dry season which is from May to September.

The dry season is the best game viewing period at the park, most animals crowd all round together at waterholes and rivers. Vegetation is very low at this time of the year which makes it easier to spot the wildlife.

Game viewing on wet summer days which are from October to April is not easy at times because of the vegetation which gets so big that it gets difficult to spot wildlife in the park.

This season is also very good since it brings along newborn wildlife and boasts a lot of green in the park which makes it so beautiful to gaze at. Vegetation grows so tremendously in this time of the year.

Kruger National Park has always made it an effort to contribute to the improvement of communities. They have different initiatives that enrich poor communities and creating a better place for people to live in.

The latest project that they have been involved in is introducing the 5-year program which focuses on a school that is near the park.

They have supported the school with new equipment and facilities such as Computer Labs, Science Labs, and Libraries. The park has made a pledge to continue uplifting communities and lending a hand wherever they can.

Kruger National Park’s summer season (October – April) is very hot and receives a lot of rainfall during that period.

The winter season (May – September) of the park is humid and mild, but visitors in the evening would be advised to wear warm clothes as it would be a little bit chilly.


x
x
We use cookies on our website to give you the most relevant experience by remembering your preferences and repeat visits. By clicking “Accept All”, you consent to the use of ALL the cookies. However, you may visit "Cookie Settings" to provide a controlled consent.
Cookie SettingsAccept All
Manage consent

This website uses cookies to improve your experience while you navigate through the website. Out of these, the cookies that are categorized as necessary are stored on your browser as they are essential for the working of basic functionalities of the website. We also use third-party cookies that help us analyze and understand how you use this website. These cookies will be stored in your browser only with your consent. You also have the option to opt-out of these cookies. But opting out of some of these cookies may affect your browsing experience.
Necessary Always Enabled
Necessary cookies are absolutely essential for the website to function properly. These cookies ensure basic functionalities and security features of the website, anonymously.
Functional
Functional cookies help to perform certain functionalities like sharing the content of the website on social media platforms, collect feedbacks, and other third-party features.
Performance
Performance cookies are used to understand and analyze the key performance indexes of the website which helps in delivering a better user experience for the visitors.
Analytics
Analytical cookies are used to understand how visitors interact with the website. These cookies help provide information on metrics the number of visitors, bounce rate, traffic source, etc.
Advertisement
Advertisement cookies are used to provide visitors with relevant ads and marketing campaigns. These cookies track visitors across websites and collect information to provide customized ads.
Others
Other uncategorized cookies are those that are being analyzed and have not been classified into a category as yet.
SAVE & ACCEPT
Translate »